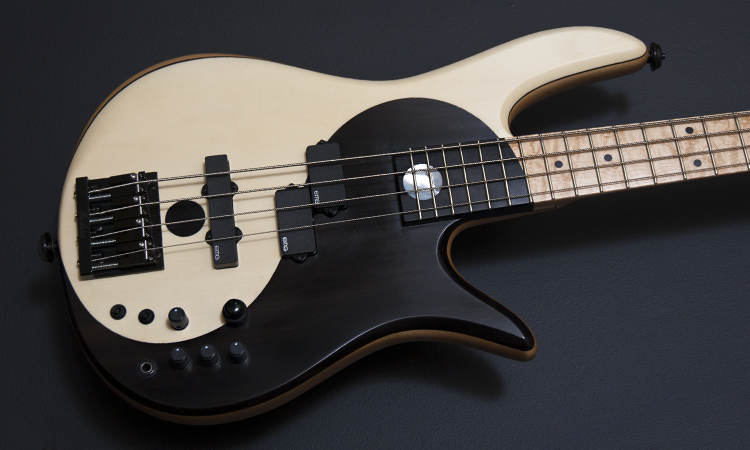 Victor Wooten redefines the word musician.  Regarded as one of the most influential bassists since Jaco Pastorius, Victor is known for his solo recordings and tours and as a member of the Grammy-winning super-group, Béla Fleck & The Flecktones.  He is an innovator on the bass guitar, as well as a talented composer, arranger, producer, vocalist, multi-instrumentalist and simply one of the finest people we know.

In 1995, Victor approached us with an idea to have a yin-yang symbol inlaid on a Monarch bass.  We then surprised Victor by using the yin-yang symbol to cover the entire front of the bass, instead of a simple inlay!

Needless to say, he was thrilled, and now the Victor Wooten Yin-Yang Deluxe is one of our most desired models.  The Yin-Yang is also one of the most challenging models for us to build because of the complexity of the many details involved in its design.  For example, the top is created from two pieces of wood seamlessly fitted together to create the Yin-Yang symbol that continues onto the end of the fingerboard.  As is true with all Fodera basses, the Yin-Yang Deluxe is entirely handcrafted and tailored to the individual needs of the player.

Because of the tremendous amount of detail work involved with this model and the fact that it takes as long to build as two “normal” Fodera instruments (without the inlaid Yin Yang symbol), beginning in 2010, the Yin Yang Deluxe became available exclusively on a direct-order basis (no sales through dealers).  Our production of these instruments is limited to just six (6) per year — each bearing a Mother-of-Pearl inlay in the back of its headstock identifying its number in that year’s series.

Specs for the Victor Wooten Yin Yang Deluxe include: