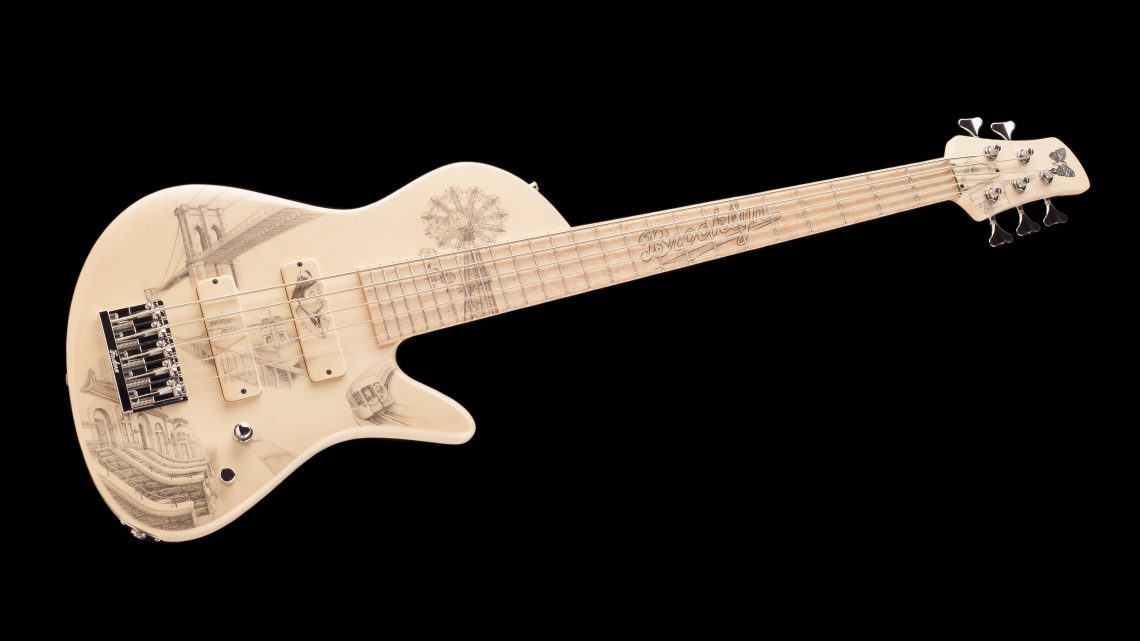 Fodera Guitars is proud to present the third installment to our Masterbuilt line – The Emperor II 5 Elite – “Brooklyn” !  Brooklyn, NY has been a part of the heart and soul of Fodera Guitars since the founding of our company. Since 1983 Fodera instruments have been manufactured in Brookyln and our founding partners, Vinny and Joey, are both born and raised “Brooklynites” in every sense of the word.  For our latest Masterbuilt, we wanted to pay homage to our beloved borough by featuring the incredible draftwork of none other than Vinny Fodera.  While Vinny is of course known for his lutherie work, he is also a passionate draftsman.  Solid blocks of Holly were chosen as the canvas for the Masterbuilt’s hand-drawn images which consist of various iconic Brooklyn scenes – all of which have sentimental value to Vinny.

Image 1 – The Honeymooners is one of Vinny’s most favorite childhood shows. Ralph Kramdon – played by actor Jackie Gleason – is a bus driver for the fictional Gotham Bus Company based out of Brooklyn, NY. Ralph was given honorary membership in the union for real New York City bus drivers during the run of the show, and a Brooklyn bus depot was named in Gleason’s honor after his death.

Image 2 – New York City is widely known for its vast and intricate subway system. The N-train which runs between Brooklyn and Manhattan is used daily by Vinny and the rest of the Fodera team as it stops right on 36th Street where our shop is located.

Image 3 – Arguably the most iconic image associated with Brooklyn, the Brooklyn Bridge is a hybrid cable-stayed/suspension bridge and is one of the oldest bridges of either type in the United States. Completed in 1883, it connects the boroughs of Manhattan and Brooklyn by spanning the East River.

Image 4 – Park Slope is a neighborhood in northwest Brooklyn that is well known for its Brownstone apartments. A typical architectural detail of brownstones is the stoop, a steep staircase rising from the street to the entrance to the typically second-floor level.

Image 5 – Sheepshead Bay is a bay separating the mainland of Brooklyn, New York City, from the eastern portion of Coney Island and was named for the sheepshead, an edible fish found in the bay’s waters. Many fishing boats can be found there, reflected in the drawing of the Monarch and the Emperor (named after our two original bass shapes) docked in the bay.

Image 6 – The Parachute Jump was an iconic amusement ride in the famous Coney Island, Brooklyn. Know for its iconic open-frame steel structure, at 250ft tall it has been called “The Eiffel Tower of Brooklyn” and remains to this day a Brooklyn landmark.

Image 7 – The backside of the bass features a large Old-Dutch style map of the borough of Brooklyn. Before Brooklyn was a cultural and arts destination, it was first a Dutch settlement known as Breukelen — named after the town of Breukelen in the Netherlands. The Dutch colonized what is now present-day Brooklyn in 1646, establishing six different towns with defined borders. These original towns eventually became English settlements, and then the settlements were consolidated to create the City of Brooklyn.

Images 8 and 9 – Vinny has always been a big fan of baseball and in particular, the infamous Brooklyn Dodgers. As an homage to Brooklyn’s home team, Vinny drew the Masterbuilt “plaque” in the style of a baseball pennant and to round out the bass, “Brooklyn” was drawn in the old Dodgers type-font across the 12th fret.

Image 10 – Industry City, a hub for creators and innovators, has been home to Fodera Guitars since 1990. The image drawn here on the headstock is a reflection of Building #7 which can be seen across the window from Vinny’s draft-table yet was drawn with the #6 to reference the building where Fodera is located.

Masterbuilt #3 features a never before used combination of solid Holly body wings, Holly toneblock, paired with a 3p-pc Maple Neck. Tonally, Holly is a hypothetical blend of Alder and Korina. It retains the warm character of Alder with the rich mids and punch of Korina. Paired with our Fodera / Duncan Dual Coil pickups in 70’s spacing, this bass has a tight, focused low-end with a percussive attack. 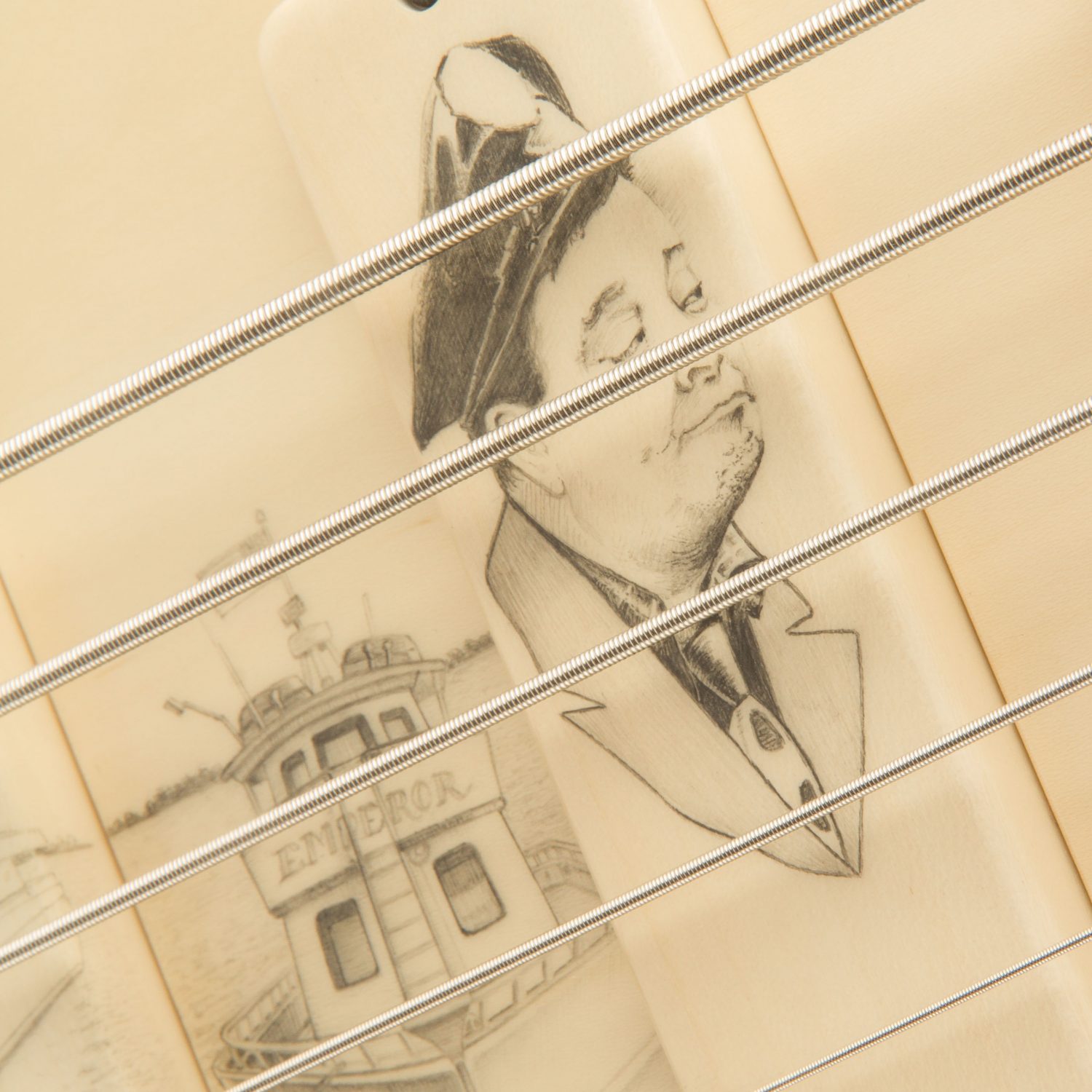 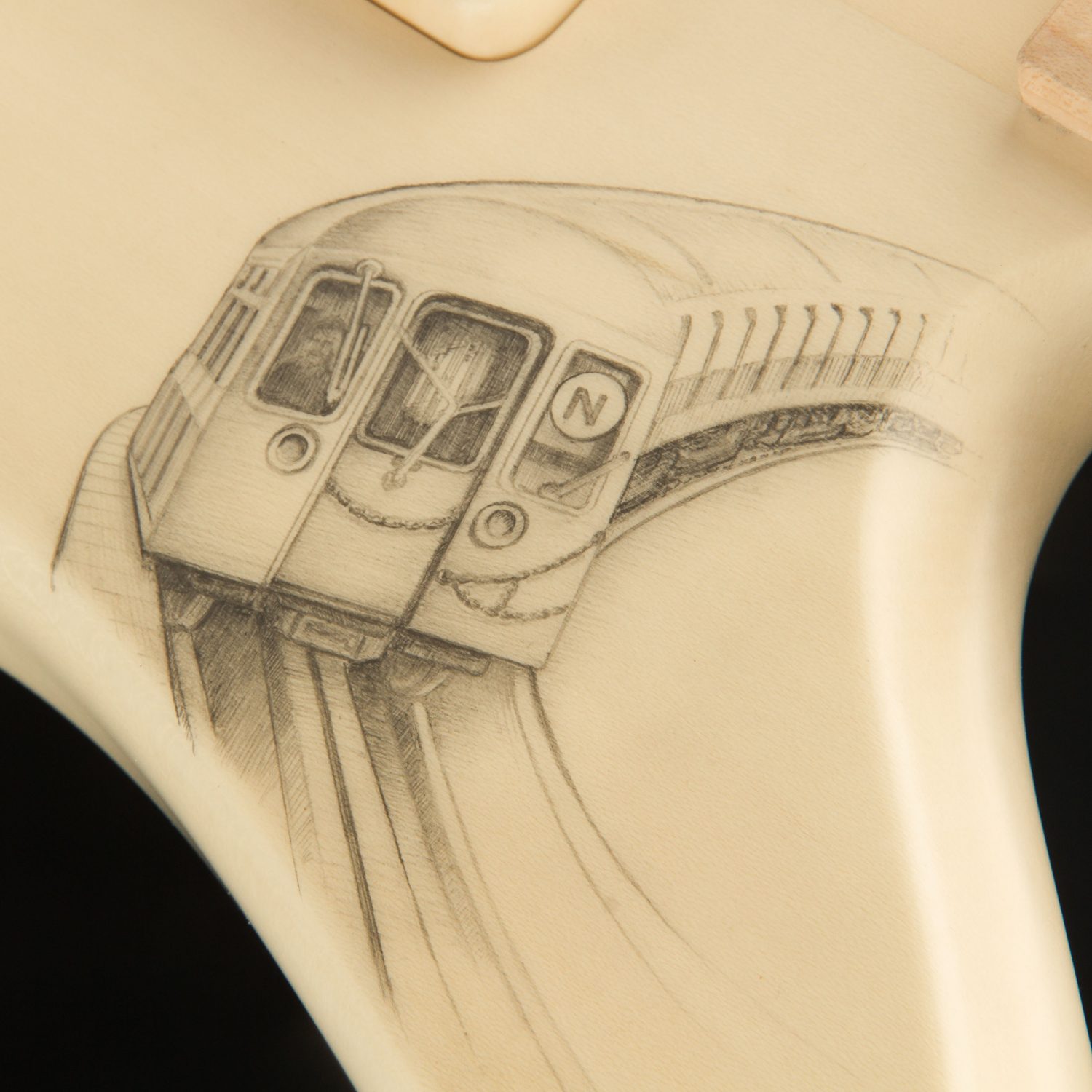 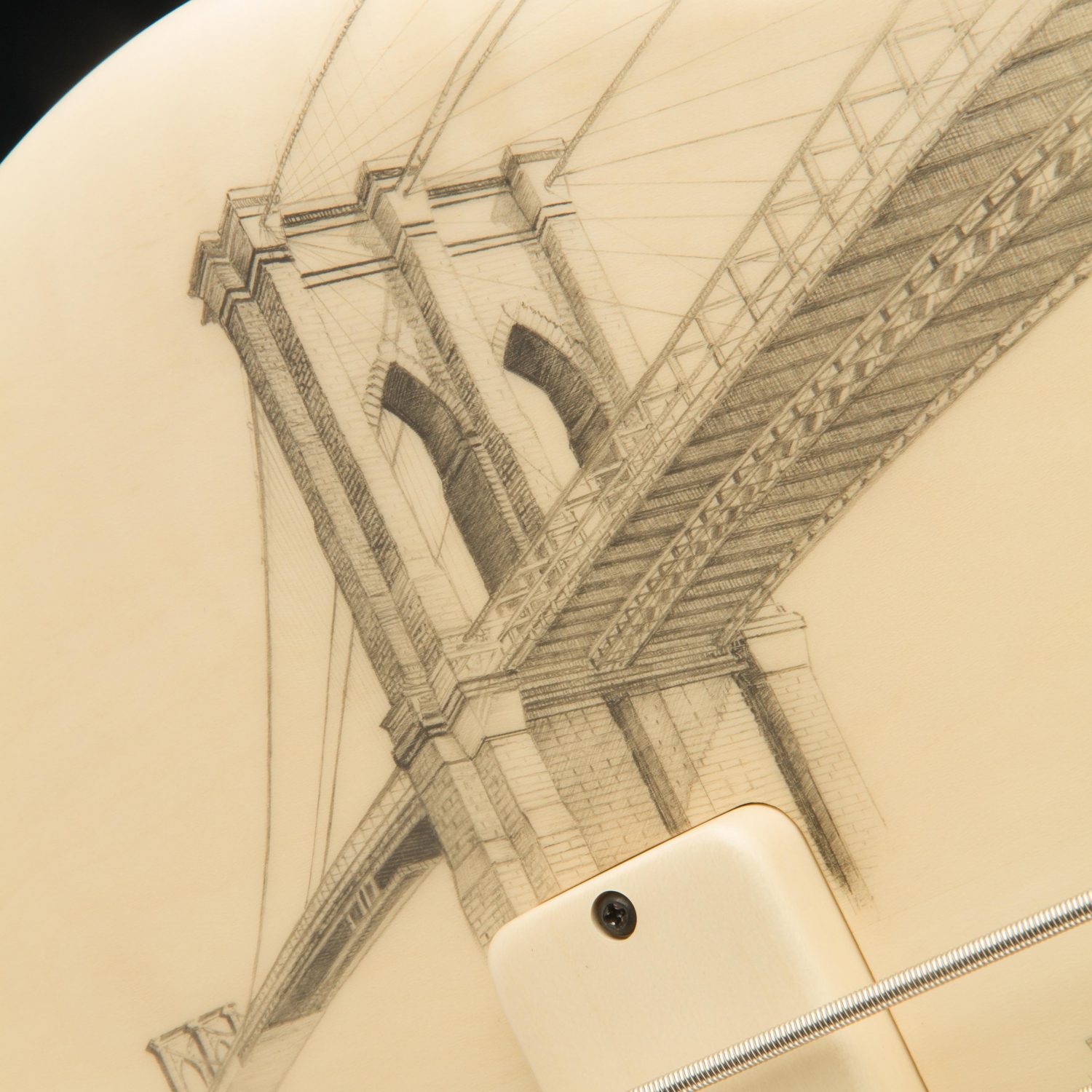 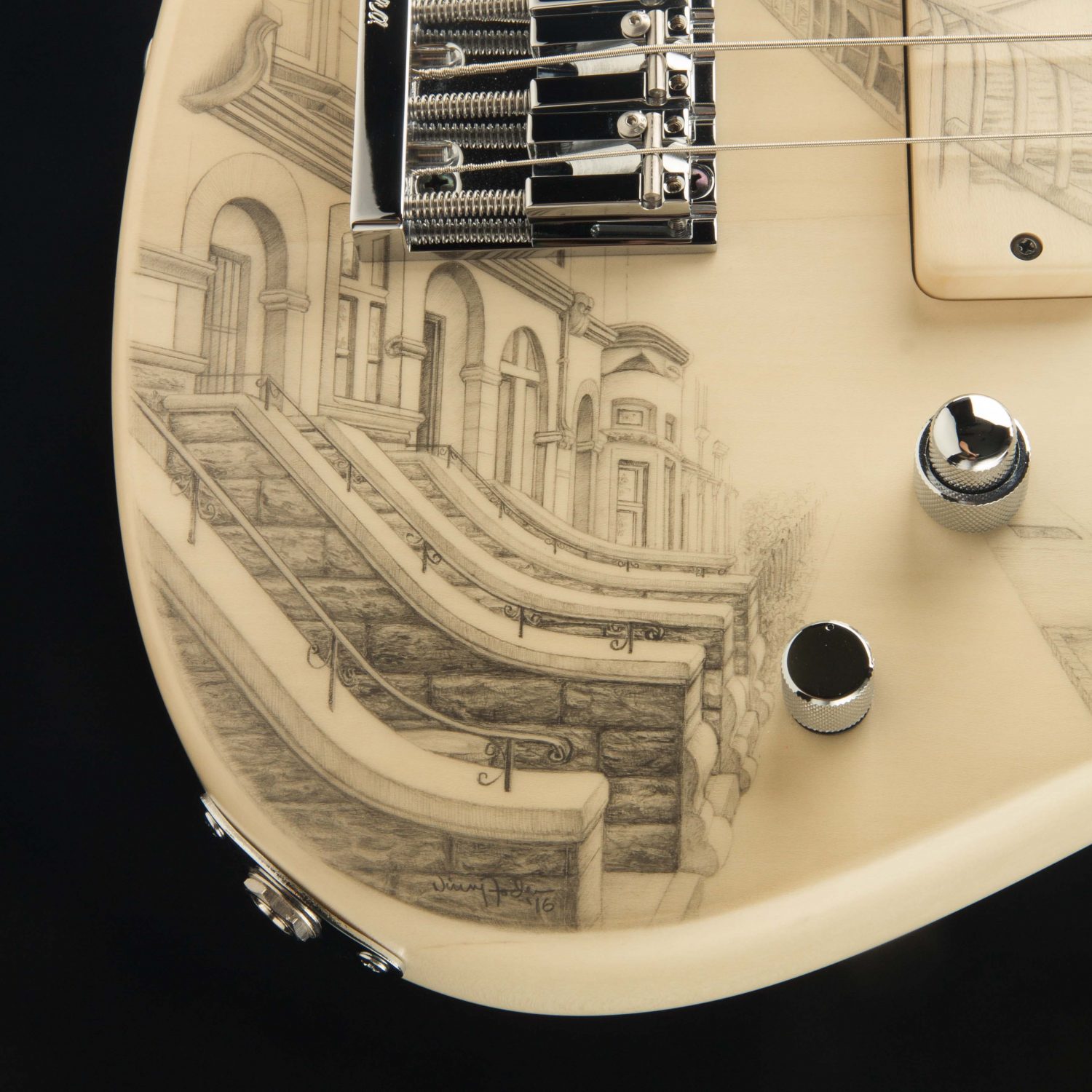 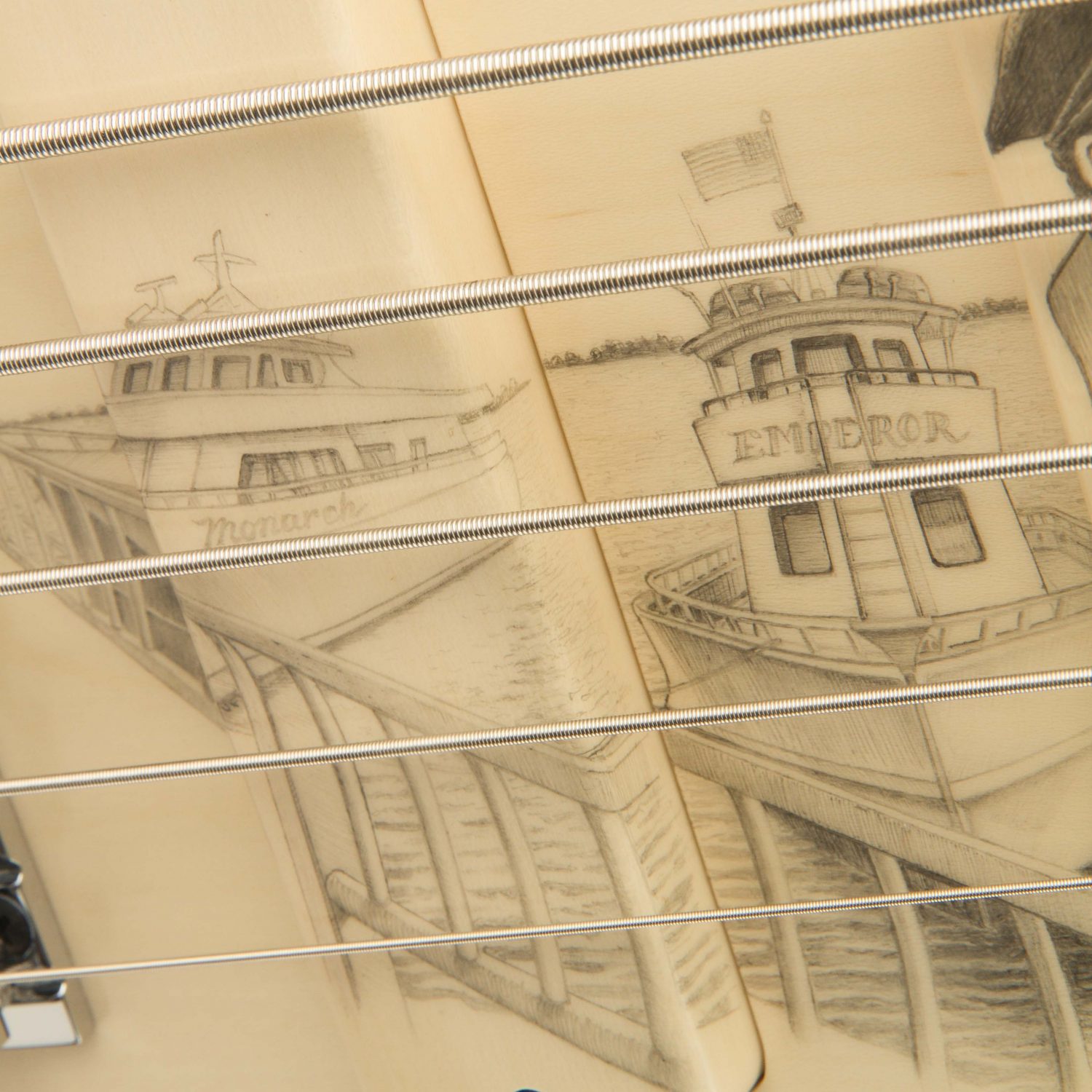 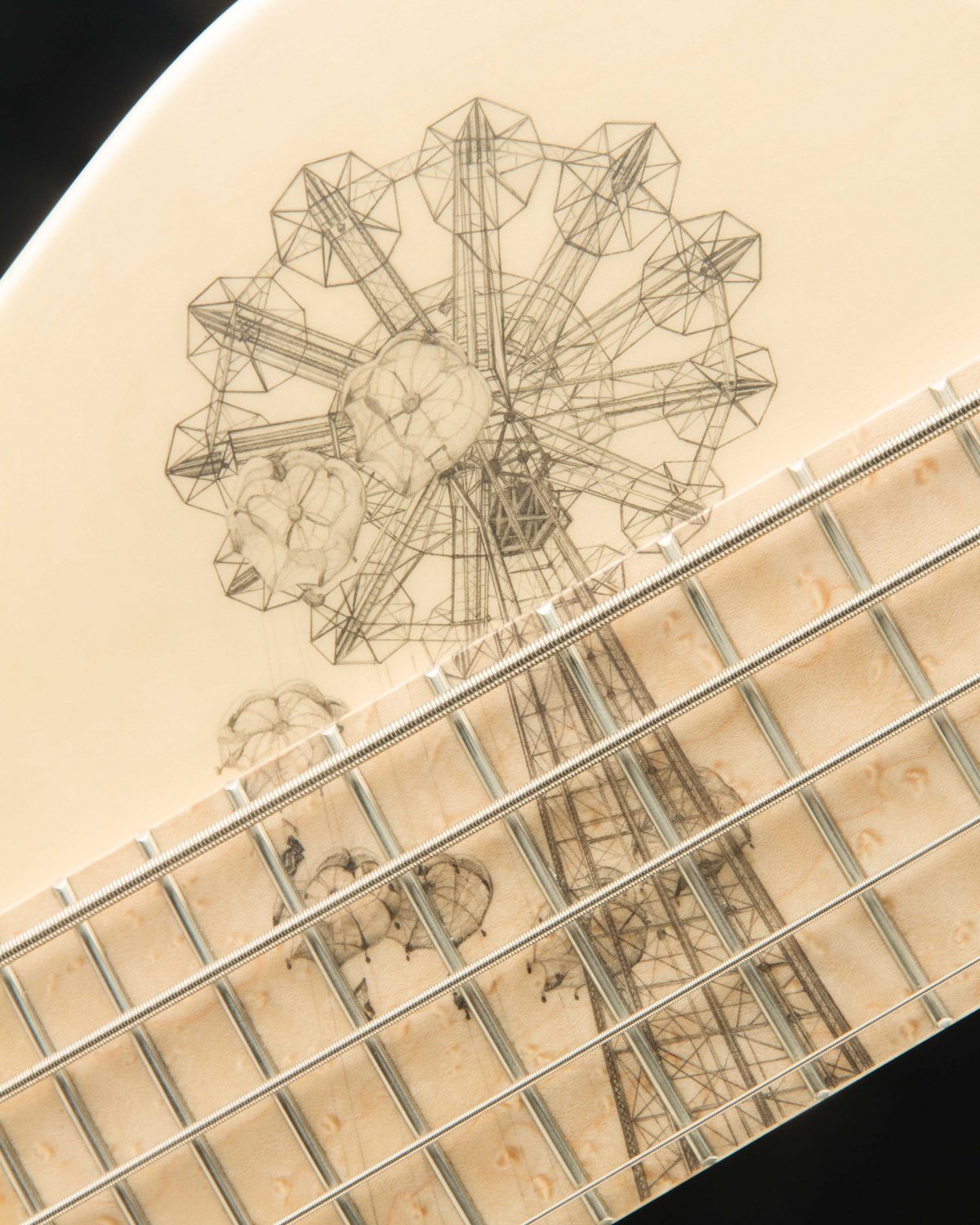 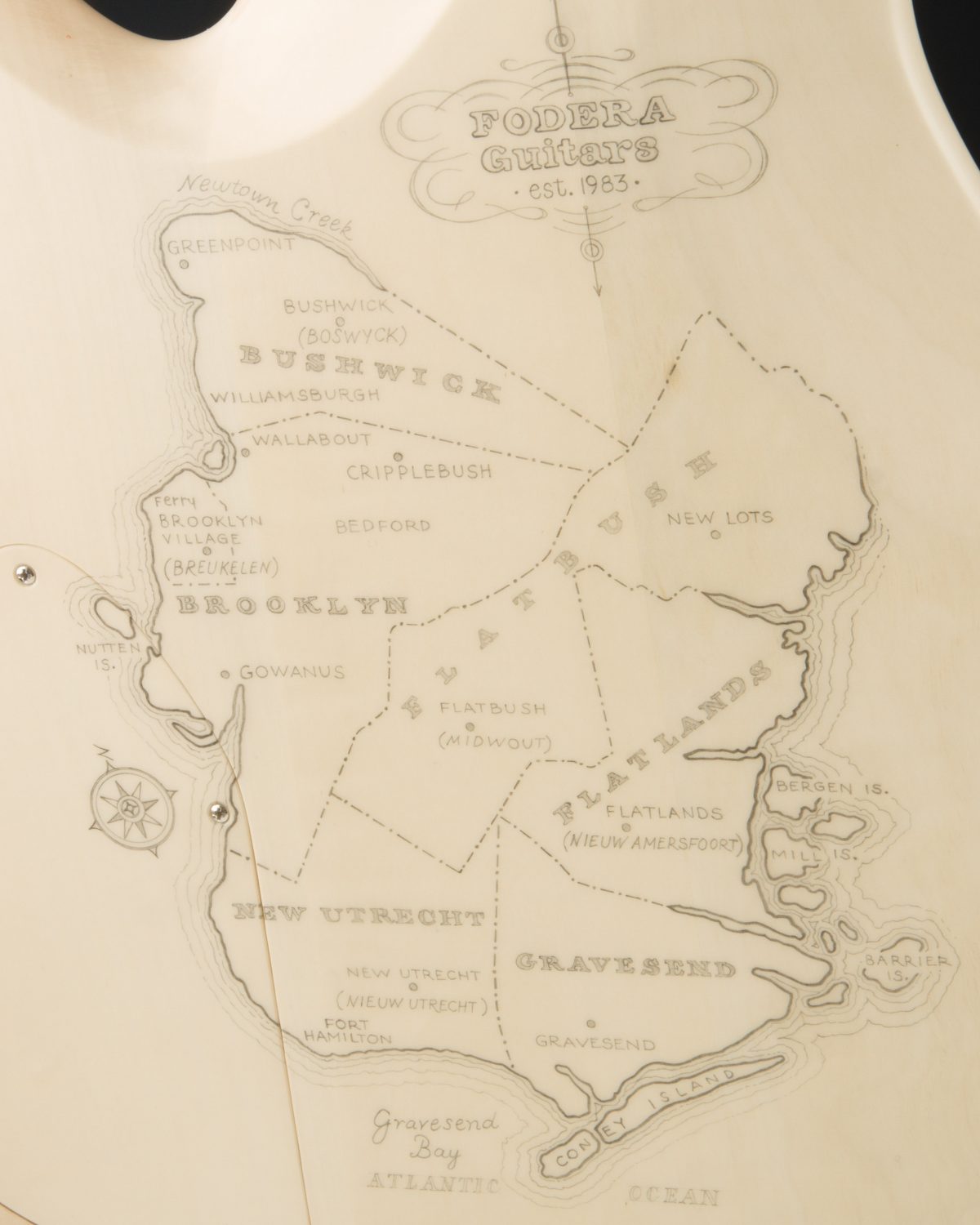 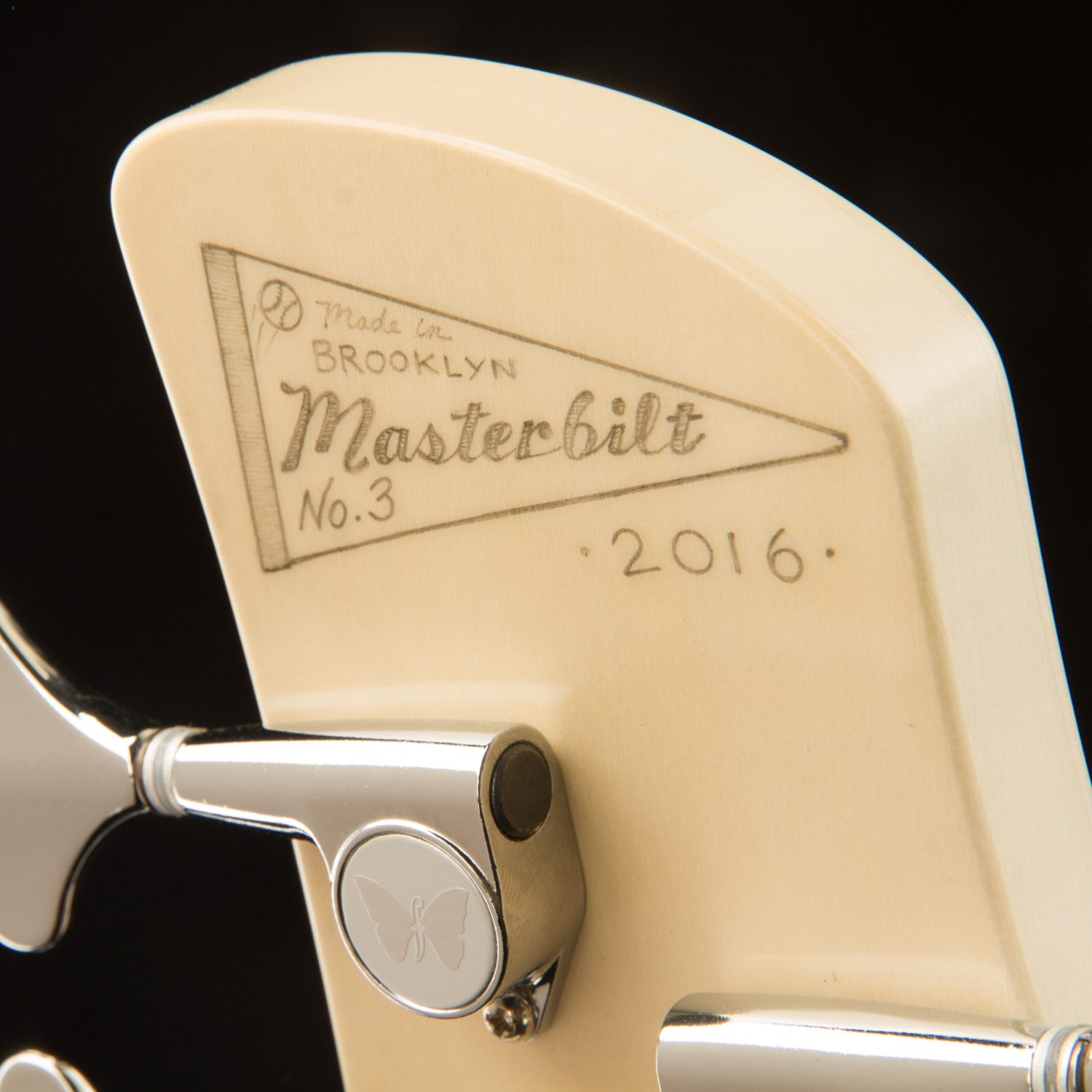 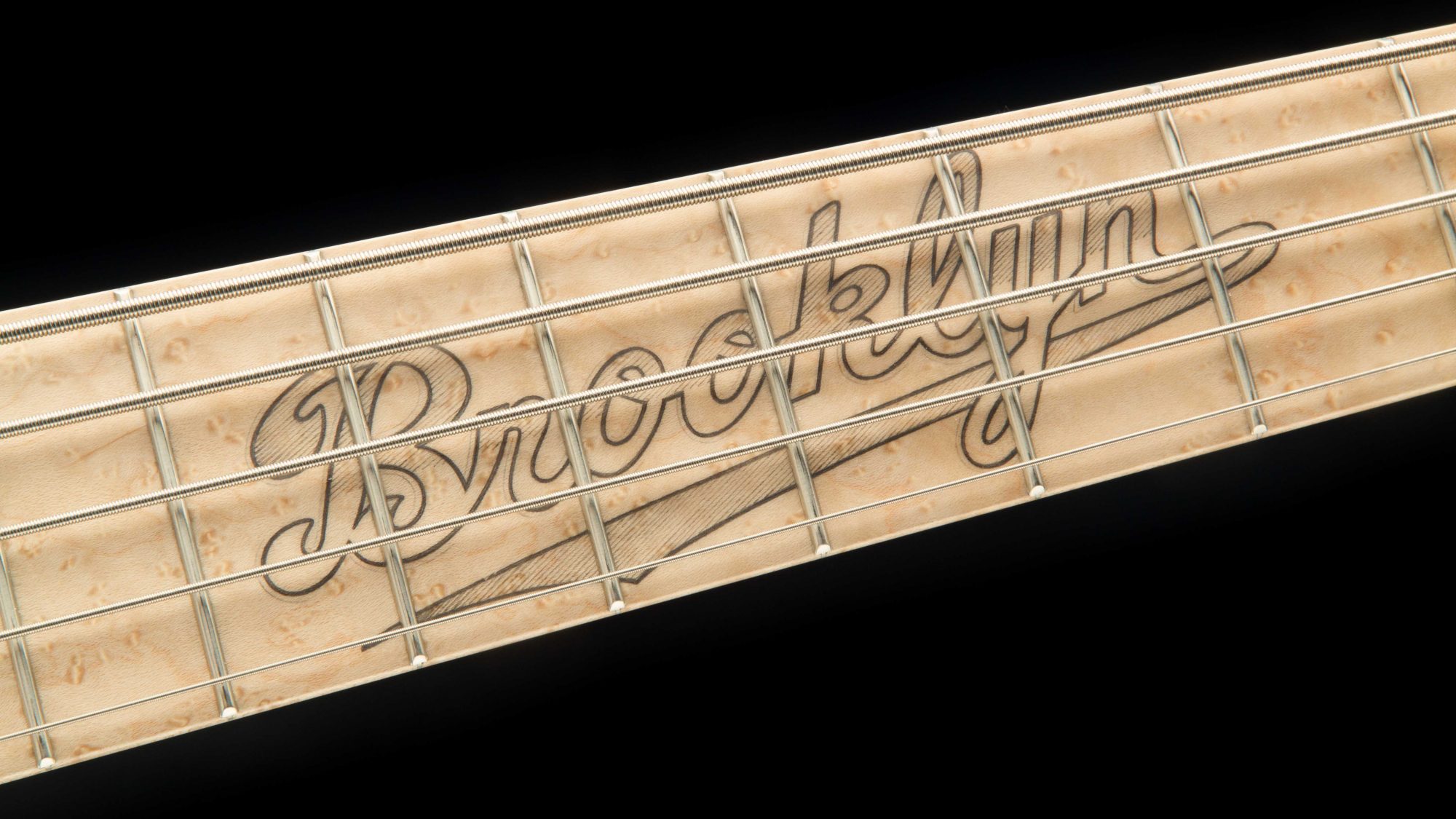 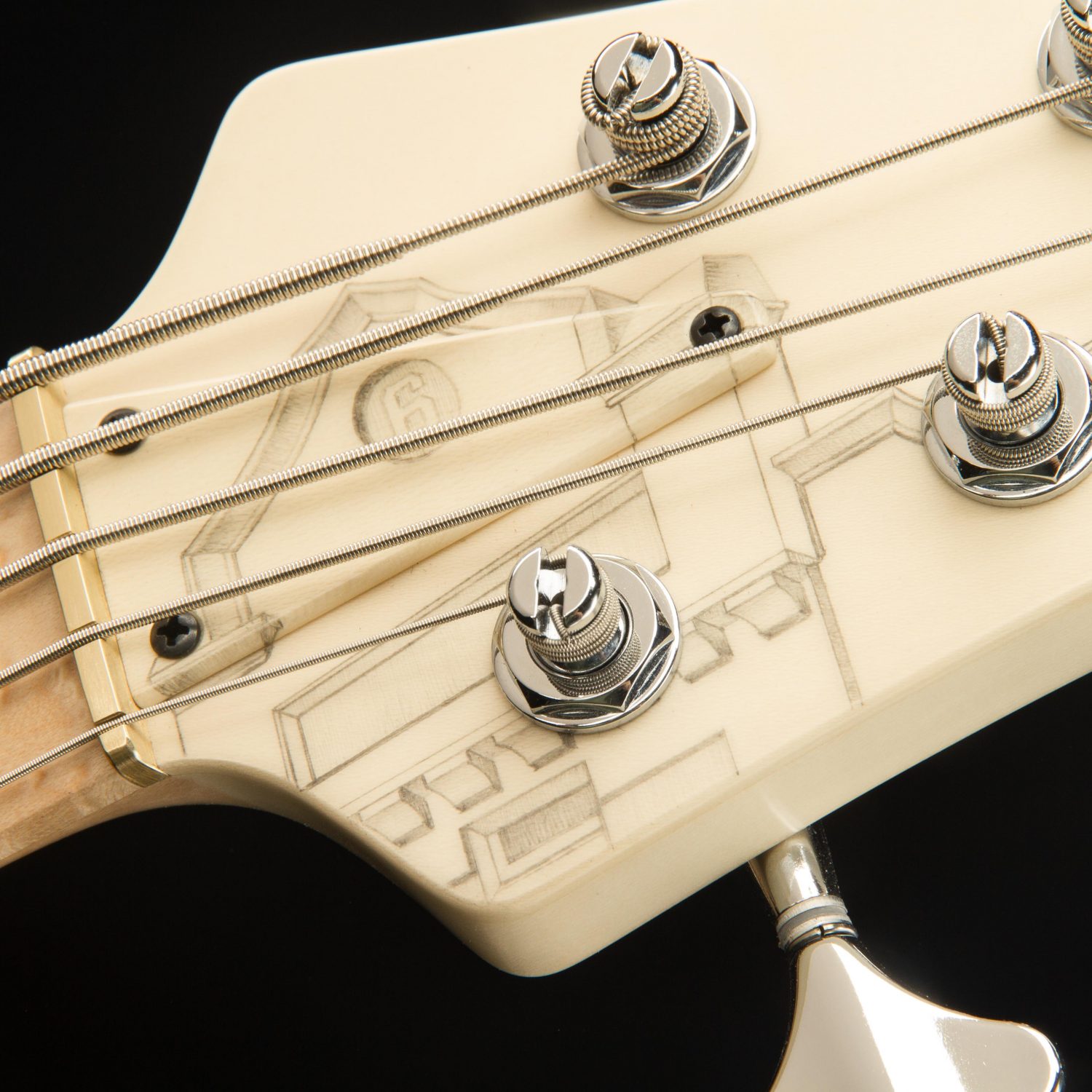