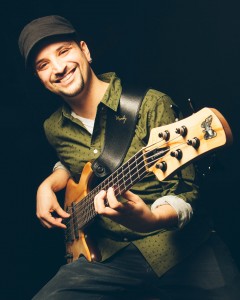 1) Tell us how you started on the Bass guitar. Who and what were some of your early influences?

I started playing bass because my father, Jeff Ladd, is a great bass player. Like most kids with musical parents, I ended up listening to whatever was playing in the house or the car. Some of my father’s favorite groups were Tower of Power and Steely Dan, so I was involuntarily listening to guys like Rocco, Chuck Rainey, and Anthony Jackson before I even knew what a bass was.Once I started playing, I would try to learn lines from whatever songs were on MTV or anything that Dad had me working on.I think I officially made the decision to be a bass player when my father took me to what I believe was the very first “Bass Day” in NYC.Hearing guys like John Patitucci and Oteil Burbridge got me really fired up and made me want to check out more of the great players that were out there. I then went through phases of wanting to sound just like Jaco, Victor Wooten, Paul Jackson, and Marcus Miller (though that didn’t quite pan out:)

2) What qualities should bass players have in your opinion? What are some words of advice you would share to a young player?

We’ve all heard it a million times but let’s go ahead and make it 1,000,001. The bass is a foundational instrument and I think our top priority should always be to make the music feel good. Drums and Bass have an amazing amount of influence and responsibility within a band, but I’ve always felt that if you make the time and feel your first order of business, your playing will always have a musical impact. The instrument has come a long way in terms of what can be done melodically and technically. It’s very easy to get caught up in all of these crazy solo bass videos online (myself very much included); but keep in mind as inspiring as that stuff can be, nobody really hires a bassist for that purpose.

3) How did you come to know about Fodera?

The first time I heard a Fodera bass was on one of Victor Wooten’s earlier records, but the first time I actually got to play one was years later while studying with Matthew Garrison at Berklee. I checked out his bass a few times during lessons and even though his setup is very different from mine, I found it to be one of the most comfortable instruments I’d ever picked up. I wasn’t looking for a new bass at that time but it was hard to forget how effortless that instrument played. So later on when I made the decision to have an instrument built for me, Fodera was the first builder that came to mind.

4) What are some things that players should think about when designing a custom bass?

A good place to start is to think about some players whose tone you like. If they’re fairly well known, chances are that someone on the Fodera team will know about the components that player’s bass is made of. I also think that it’s important to check out as many instruments as you can in person and ask some questions. Let’s say you sit in at a jam session and the house bass player lets you use their bass. If you dig it, ask them what they know about the specs. Then you can pass this on to the shop and have some of these things incorporated into your custom bass.

5) Tell us a little bit about your custom Fodera bass.

I’ve always played more traditional Fender-style instruments with double cutaway body shapes and bolt-on necks. So in order not to go too far left of what I was used to, we decided on an Emperor 5 string. When we started working out the specs for this bass, I knew almost nothing about different tone-woods, pickup spacing, ect. Vinny, Joey, and Jason did an excellent job translating what I was hearing in my head into components of the instrument I’m now playing. It was really eye-opening getting to see how all the different aspects affect the overall tonal signature! I’ve always aimed for a sound that is deep and warm but still clear and punchy. We ultimately decided that a walnut body, maple neck, and a rosewood fretboard would be the best way to get that sound. Having some sonic flexibility is also important to me and this setup, combined with 70’s spaced dual-coil pickups, allows for a pretty wide range of tones. To my ears, it’s a best of both worlds situation in that there are some modern-sounding elements with a nice amount of vintage flavor.